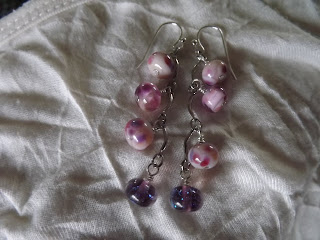 Every year about this time, I get this feeling that time is speeding up like an out of control merry-go-round.  I constantly feel like I don't have enough time and that there is too much to do.  It's not real!

I know this happens every year because I distinctly recall my Facebook post from last year about worrying about all that I had to do.

I think I may have finally found the root of this feeling.  Close to twenty years ago I had a job.  It had been a great job and then the company was sold to an individual who really had no clue about how the business operated.  It became a very stressful job.  At first I was working part-time.  This soon became full time work that I didn't really want--having three small children at the time.  It wasn't long before even full time wasn't enough and I was working seven days a week.  Talk about stress!  And there was never enough time to get the work finished.  I think that my boss had difficulty with scheduling...

Anyway, I was fired from this job (best thing that ever happened) the end of November.  So these feelings of anxiety probably stem from this time.  I thought I had worked through these issues.  I find it interesting that they come back to haunt me years later.

An amusing side note on this story...Several months after I was fired, the woman who owned the company called me back and wanted me to come back to work for her.  In fact, she tried to get me to return at least two more times.  I did NOT say what I was thinking (mostly along the lines of "when hell freezes over"), but I also did not ever go back to work for that company.

Yesterday I again felt like I was overwhelmed, so I finally wrote my to-do list out.  Not that much to do and I got most of it done.  To continue to conquer this feeling, I got a nice, shiny, new notebook and started my to-do list BEFORE I went to bed.  There wasn't that much on it and I slept much better.

The earrings at the top of the post are one of seven pairs that were made for a friend to give as Christmas gifts.  I will be posting the pictures over the next few days.  I also have pictures of the twenty bookmarks.   Downloading all those pictures was one of the things I needed to get done.

Posted by Celeste Kemmerer at 3:28 PM