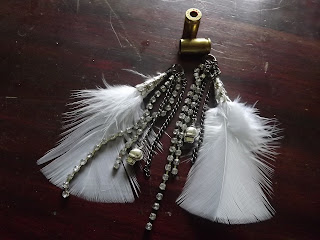 I recently picked up the current copy of Jewelry Affaire.  There was a picture of a pair of earrings that looked like they were made from empty bullet casings.  I don't think they actually were, but my imagination immediately went into overdrive.

I told Kent that I needed some empty casings.  I didn't want them too small and I didn't want them too big.  I thought that the shells for his .44 might be just the right size.  They weren't.  They were much too big.  He thought that I probably actually wanted 9mm shells.  That turned out to be the case.  I know lots of people that target shoot--however, they usually do not shoot 9 mm pistols.  But as my good fortune would have it, my sister-in-law had collected some 9 mm shells when she was at the shooting range.

Naturally, I'm going to have to have a hole in these to connect the earwires and everything else together.   Instead of drilling a hole my sister-in-law suggested that I just punch the primers out.  Well, that is easier said than done.  I asked Kent to punch out the primers for me, but he's heading into harvest and is very busy and I (obviously) want everything done immediately.  So today I set up my little vise, grabbed my trusty hammer, a small nail (brad actually) and after pounding the shell out of the vise, getting it turned sideways, using too large a nail, and smashing my fingers actually managed to punch the primers out myself.  I'm quite pleased with myself;  I didn't even bleed on the white feathers.

I had already wired up all the things I want to put with the shells.  To finish this project, I'm going to make some glass drops in purple and fuschia and then wire everything together.  They may end up a little long, but they have been really fun to make.

Posted by Celeste Kemmerer at 2:35 PM