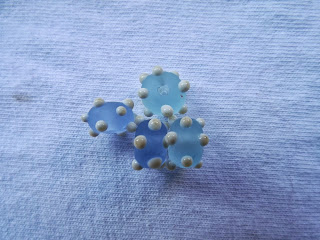 Recently I was reading through one of my cookbooks and this was a recipe title that I found:  "Faux Fondue Au Beurre d'Arachide".  I looked at that title and without reading the recipe to see the ingredients, I loosely translated it to mean "Fake Fondue of Sipder Butter".  THEN I looked at the ingredients.  Ah...Fake PEANUT butter fondue!

Then, for some reason, I was reminded of my 9th grade language teacher.  Mr. P. was a very interesting individual (which, at 15, I couldn't quite appreciate).  He was a short, rather round individual and was quite as bald as the proverbial billiard ball.  He had emigrated to Canada from Lithuania or Latvia.  I don't remember which one.  I just know it was one of those little countries that were part of the USSR.  His native language was neither English nor French--this might explain the strange accent that people complained of later when I took French in college.

Mr.P had a number of entertaining quirks.  He was a firm believer in students arriving on time and not only paying attention, but acually looking like they were paying attention.  He also found gum to be anathema.  The thing I remember best from class is him bouncing between the rows of desks either inquiring,"Do you haf a chewing gum in your mouth?"  or demanding, "Seet op, seet op, seet op!!"  (Sit up!)  And heaven help the poor student who actually fell asleep in his class.

Partway, through my 9th grade year Mr. P decided for some obscure reason to invest in a bad toupee.  I don't even think he waited for a holiday or weekend.  One day he was hairless and the next he had this amazing wig.  We had all managed to close our mouths long enough to get through class, when the next class of students started arriving in the hallway.  The window in the classroom door was soon full of staring amused teen-agers.  In exasperation, Mr. P pulled the shade, so that they were unable to see.  Whereupon, one enterprising young man--being taller than most--proceeded to jump up and down in order to see Mr. P through the transom window.

At some point during my high school career, Mr. P also sponsored his sister and she also emigrated to Canada.

I only had Mr. P for one year, but it is obvious that he made a lasting impression on me.

Posted by Celeste Kemmerer at 3:35 PM