I recently read on a friend's facebook that baking soda and peroxide mixed into a paste make a very good cleaner.  So--being the chemistry student who mixed all the chemicals to see what would happen--I tried it.  I happened to have both baking soda and hydrogen peroxide in the house at the same time.

I got my husband's popcorn popper.  We have one of the old-fashioned ones that you use on the stove and turn a little handle.  We have managed to kill several of the fancy electric poppers and so are back to a basic one which we hope will last a long time.  Anyway, it hasn't been cleaned since it entered the kitchen (I don't think) and was covered with a dark, greasy residue.

I covered it with baking soda and then squeezed hydrogen peroxide onto the baking soda.  There was none of the bubbling that I get when I combine vinegar and baking soda.  I let it sit for a while and then began to clean it off.

For a non-toxic cleaner it works quite well.  However, it ONLY works if one applies copious amounts of elbow grease.  It doesn't appear to make everything wash off by magic--it requires major scrubbing.  I'm not sure it's any better than vinegar and baking soda.  It may not smell quite as wild as vinegar and baking soda does.

And here's my little experiment for today--frosted blossoms with sugar frit and my own headpins. 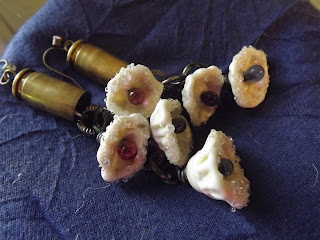 The headpins are made from rubino, light violet, and medium blue transparent effetre glass.  Since I'm still experimenting, I used a 20 gauge black annealed steel wire for the headpins.
Posted by Celeste Kemmerer at 3:03 PM